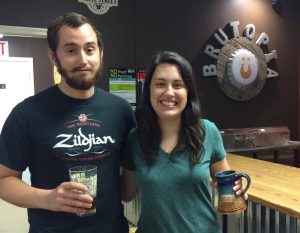 How old were you when you drank your first beer?:
Lexie: Honestly, I hated beer for the longest time. I know I had a sip of some family member’s beer when I was in my early teens, and it turned me off to beer until I hit my 20’s.
Dan: No clue… I have some hazy memories of drinking High Life early on, but no definitive date.

What was the first beer you ever drank?:
Lexie: The first craft beer I ever drank was probably a stolen sip of New Belgium Fat Tire that Dan was really into at the time. The first beer I ever enjoyed was a beer called Triple de Ripple at a brewery called Brugge in Indianapolis.
Dan: I’m pretty sure it was Abita Turbo Dog. That’s definitely the first one I enjoyed.

What is your favorite Stout?:
Lexie: I really love Stone’s W00tstout. I’ve had plenty of amazing stouts since then, but I have yet to find a stout that really tops it for me. I also really enjoyed when Brutopia had the bourbon barrel aged SteakCake Stout by Double Barley. (Note: No one else enjoyed this beer, but I loved it!)
Dan: Victory at Sea.

You’re mowing your grass, what are you drinking?:
Lexie: I recently tried the Fresh Slice IPA at Brutopia, and that was pretty perfect for yard work.
Dan: Oberon. Maybe Harpoon’s Big Squeeze

Are you a home brewer or have any desire to home brew?:
Lexie: Dan and I started brewing our own beers about a year ago with our good friend Drew. Our first beer was a total failure (albeit still drinkable but totally malty), but we remained steadfast! Our most recent Ginger Saison turned out to be pretty solid.
Dan: Briefly and without great success. It turns out I’m better at drinking beer than making it.

Do you ever go to beer festivals?:
Lexie: I’ve been to a couple. My first beer festival was Brew Bern, but I think my favorite festival is the Rare and Vintage North Carolina Beer and Wine Festival in Raleigh. Mostly because it was overwhelmed with delicious stouts and other winter beers.
Dan: Yes.

How far would you be willing to drive for your favorite beer?:
Lexie: When Bourbon County came out a few months ago, I know I was looking as far as Charlotte. That being said, we ended up finding a bottle at Craven 247, so it worked out.
Dan: It wasn’t exactly intentional, but I did drive to New York once to get Dogfish Head 120 Minute IPA.

What is your favorite drinking game?
Lexie: Usually something involving television. Usually something involving bad television. I like “The Bachelorette” drinking game. Drinking anytime someone uses the following terms:
– “right reasons”
– “developing feelings”
– “falling in love”
– “like” (as a filler statement)
Dan: Drink: The Game. It’s when you drink the beer. Upon completion of said beer, the participant is awarded with another beer*
*Replenishment of beer subject to discretion of more sober friends and/or availability of beer.

If you could tip back a beer with anyone, who would it be with?
Lexie: Being an English teacher, I can think of a plethora of authors and professors that I would like to drink a beer with (notably the late Dr. Marshall Gregory). That being said, also being an English teacher, I have zero free time. So the ability and time to drink beer (and possibly play board games or watch tv) with my best friend, Sam, and Husband Dan would also be pretty sweet.
Dan: I don’t know. These questions are really hard. Ken Burns?

What is in your perfect 6-pour flight?
Lexie: OH NO. This is such a difficult question! Honestly, it would probably be entirely composed of experimental home brews from various home brewers in New Bern. (I missed them at Brew Bern this year!) I like trying strange, extreme beers, and there’s no better way to do that than by trying home brews.
Dan: I have no idea how to answer this. I prefer that all 6 beers be wet and somewhere between cool and cold.