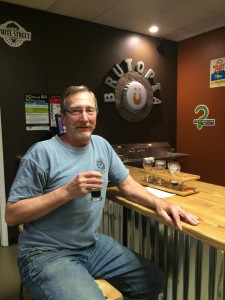 How old were you when you drank your first beer?: 15 years old .I lived in Cleveland County- a completely dry county. Best part was that the holy folks were the best of friends with the bootleggers! Neither group wanted to legalize alcohol in the county!

What was the first beer you ever drank?: Probably a Budweiser

What is your favorite style of beer?:Probably still IPA’s.   There are too many good IPA’s out there, especially from New England.

Well then, what is your favorite IPA? Well…. (note: This took about 15 minutes of Bill searching through Untappd and his notes to finally figure out) Congress Street by Trillium.   Out of the gazillion IPA’s I’ve tried, that’s the one that I want the most.

What is your favorite brewery? Hill Farmstead, even though my favorite beer doesn’t come from them.

You’re mowing your grass, what are you drinking? Melon Gose from Anderson Valley, if I can get my hands on it.

Are you a home brewer or have any desire to home brew? You know….I really seriously thought about it, but there are so many good beers, it’d be stupid for me to try to catch up. Much respect for home brewers, though,

Do you ever go to beer festivals? Not during duck season, peak fishing season OR baseball season!

How far would you be willing to drive for your favorite beer?   At some point I’m going to Vermont. Take the wife for the change in leaf colors and me for the breweries.

Whatcha put in that moustache to make it curl so?   Possum Grease!! In season you can get it on the side of the road!!!

What is your favorite drinking game?  “Hi Bob”.   You have to watch The Bob Newhart Show to know.   This was the first drinking game before drinking games came about. You drink when they said “Hi Bob”. You seldom made it through the entire show!!

What do you like about Brutopia?   I am just thrilled to have a great craft beer bar in James City again.