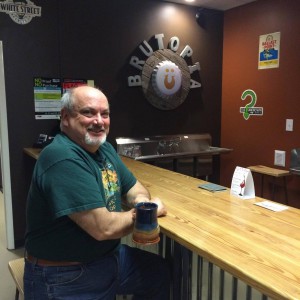 How old were you when you drank your first beer? Do you want the truth? Lets say I’ll admit to 16 years old.

What was the first beer you ever drank? Little King’s Cream Ale. Back in the day it was Schoenling Brewery

What is your favorite style of beer? Porters and Stouts. Anything dark.

You’re mowing your grass, what are you drinking? I’d have to go with a local American Pilsner

Are you a home brewer or have any desire to home brew? I do have a desire to become a home brewer. I’m going to start brewing in summer. I still want to do my idea like what they are doing in Rocky Mount. I’d like to provide a venue for experienced home brewers to take their skills to a higher level.

Do you ever go to beer festivals? I’ve gone to Brew Bern.

How far would you be willing to drive for your favorite beer?   How far is Brewery 99? Moments. That’s how far!!

What is your favorite drinking game?  Hi Bob! I forgot all about that until I read Bill Poole’s Spotlight. You noticed later in the show they’d up the times they said “Hi Bob”!!

Who’s the one person you’d love to sit down with and tip back a beer with? I’m too liberal to say who I’d really want to sit down with, so I’ll go with Thomas Jefferson. I think he’d let me know why they wanted us to truly become Republicans.   (Beer and politics, way to go Carl-ha-ha!!!)

What do you like about Brutopia?   Feels like family. They’re doing it right, taking it slow and so friendly.