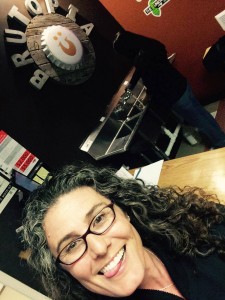 How old were you when you drank your first beer? Four-ish?   My parents would have friends over and NO one’s beers were safe if they were left within my reach. I’d drink them all.   Drink them all gone.

What was the first beer you ever drank? We were at a 4th of July party at my uncle’s house. A whole shit ton of us and I was allowed to drink a beer.   It was a Corona. Lime and all. I felt like the coolest person in the entire world!!!!! Damn I was so cool!

What is your favorite style of beer? I’m an IPA girl. I remember the days I was so not an IPA girl….. I don’t miss those days. I know “they’re” saying IPA’s are old now. No way.

What is your favorite beer, period? Heady Topper. I’ve had what they say is better, but nope. Heady Topper is my absolute favorite. I am almost happy I can’t get my hands on it all the time.

What is your favorite brewery? Holy cow there are so many.   I’d have to say Oskar Blues in Brevard, Burial in Asheville and Pisgah Brewing in Black Mountain. My favorite beers don’t exactly come from them, but the vibe, the feel of those places is hella awesome.   Super laid back… not stuffy.

You’re mowing your grass, what are you drinking? Genesee!!!!!

Are you a home brewer or have any desire to home brew? I am!!! Actually I brewed my first all-grain a few weeks ago with a recipe Tim gave me, and it is outta this world!!! I want everyone to taste it. LOL

Do you ever go to beer festivals? Pfft….Beer festivals are addicted to me. Looking so forward to hitting up Beer City Festival next month in Asheville!! Then, there’s the OBX Beer Fest… Durham….. I mean the list goes on…

How far would you be willing to drive for your favorite beer?  If I had the time, I’d drive the 13 hours, 59 minutes up to The Alchemist for sure.

What is your favorite drinking game?  Ship, Captain, Crew (dice). Gotta love a game where thinking isn’t a requirement.

Who’s the one person you’d love to sit down with and tip back a beer with? John Cusack.   Totally.

What do you like about Brutopia?   Besides slinging beers for you? It just feels like home. Laid back, down to earth, not pretentious….It’s close to the house, there’s always a great beer on tap, I can shop for my homebrew supplies while I’m having a beer. It’s hella awesome belly-ing up to the bar with fellow craft beer drinkers.