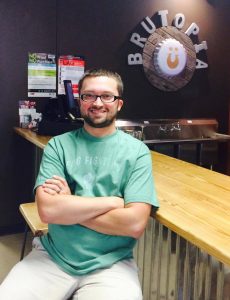 How old were you when you drank your first beer? Why… 21 of course!

What was the first beer you ever drank? Natty Light

What is your favorite style of beer?   Right now, IPA

Well then, what is your favorite IPA? I’m really digging the Citradelic IPA from New Belgium right now, great Summer beer. My overall favorite IPA would have to be Wima’s Wandering IPA from Double Barley.

What is your favorite brewery? Double Barley Brewing, I’ve never had a bad beer from them. JoCo represent!

You’re on the beach, what are you drinking? Corona in the can or Pinner IPA from Oskar Blues.

Are you a home brewer or have any desire to home brewer?  No, I’ll leave it up to the pros.

Do you ever go to beer festivals? Yes, as many as possible!

Shameless plug: Speaking of bear festivals: My band, The Joe Baes Project, will be playing at Brew Bern on June 25th! We also play at Brutopia frequently, check us out at https://www.facebook.com/joebaesproject/ Beer drinkers love us! The more you drink, the better we sound!

How far would you be willing to drive for your favorite beer?   I would love to go back to Asheville and try more beers, but that’s about as far as I’d be willing to go for now. Until I get old, retire, and buy an RV.

What is your favorite drinking game? Beer.

What beers would be in your perfect flight of 6? Double Barley Steakcake Stout, Double Barley Wilma’s Wandering IPA, Double Barley Supernaturale, New Belgium Citradelic, The Babymaker from Triple C, and The Gubna from Oskar Blues.

It’s just a couple of minutes from the house, the staff is friendly, the atmosphere is laid back, always a good selection of draft and bottled brews, and my band has a blast there! I can also walk in there at any given time and it feels like Cheers. I’ll either see someone I know, or I’ll meet a new friend.