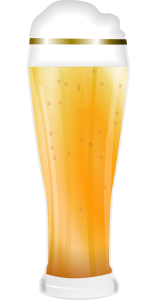 “Give me a woman who truly loves beer, and I will conquer the world”. This quite warlike sentence, pronounced about a century ago by a quite warlike man: Wilhelm II of Germany, attests beyond any doubt the low affinity of those times between women and a manly drink like beer. But according to historians, things have not always gone this way. From its early beginnings, beer has been produced – and probably also discovered – by women. For ancient Egyptians, beer was a basic food like bread, usually brewed and sold by women. And so at many populations along several centuries: women were the queens of the beer, they invented an great variety of recipes and styles, which now are unfortunately lost.

Beer historian Alan D. Eames dates the decline of beer as household art in late 18th century. Since then the male beer era began, the beer styles were consolidated in the form we know nowadays and women took distance (or were pushed away?) from the beverage they had passionately produced for thousand years. What is the reason of this? Is the men palate so far from women? Probably is not just a matter of taste.

Experiences made on wine tasting suggest that women are better taster than man. This seems to be effective also for beer and other drinks, coffee for example: the best coffee taster in Italy is a woman. We may think that women have refined their senses in the ultra millenarian work of preparing and cooking food. Hence, they are even more prepared than men to catch all the good and the bad hidden into a glass of beer. A quick search on the Internet it is enough to find out that not one, but many women exist that truly love beer. At the HopPress (a beer writers organization hosted by the Ratebeer group) three (out of sixteen) beer expert bloggers are women. One of these, Carla Companion, has written a detailed article on how to introduce to beer your “Relevant Other”. Womeninbeer and Womenenjoyingbeer are two sites grouping women beer enthusiast.

In spite of this, international statistics say that women account only between 13 and 25 percent of beer consumption. The situation is drastically different for wine: in this case women overcome men in USA wine market, since they cover at least 60 percent of market consumption and this percentage is not sensibly different worldwide. In UK facts are also more dramatic: only 13 percent of women say to prefer beer over other drinks (40 percent in whole Europe). A survey conducted by the BitterSweet Partneship (an initiative of Molson Core Brewing Company to develop the women beer market) revealed that at least a couple of deep apprehensions keep women far from beer: complain that beer make put on weight and the image of a manly, inelegant drink. On the other hand, wine can benefit of an appealing image: most men would find attractive the image of a woman drinking a cup of deep red wine, but how many of them would think the same of a woman with a beer mug in the hands and foam on the lips?

After decades of advertising targeted on male market, brewing companies begin to understand the potential of women market and the hard work they have to do to develop it. Typical ads with sexy girls serving beer to rough males or working on a shiny car engine do not encourage women to move towards beer. BitterSweet is an example of how things are changing in UK. But it is not only a question of image. Women who drink wine, say they do because they like the flavor, not because it is fashionable. After more than two centuries of men domination in beer brewing industry, beer has probably sadly lost its female side. And now beer breweries are frantically trying to recover, launching on the markets new brands specifically designed for women. Harry’s Beer, a pale ale with orange essence, is a good example of these. Only, it does not come from a big brewery: in fact it is been created by a 20 old student at Newcastle University: Harriet Easton, and this is also, maybe, a sign of the times. Difficult to say if designing specific beer styles for women it is the right direction. But surely, taking into account the smoother female taste can only be benefic and help to enrich even more the variegated world of beer styles.